The new training system is now being worked on and here is a screen shot of what I think it will look like. 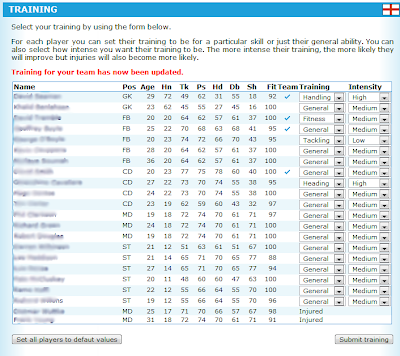 You may get an idea from the above that it is yet another area of the game being vastly overhauled. The current system of selecting two players to 'extra train' is nowhere near adequate for all the extra skills and it probably wasn't adequate anyway.

Players can still lose points through lack of match action but I am aiming for the balance to be better and more realistic.

You basically select a skill for the player to be trained on (including fitness) and an intensity for the training (low, medium or high). The higher the intensity the more likely the player is to improve but they are also more likely to get injured.

At the moment injuries seem to happen quite randomly for managers and it is confusing if the player didn't play during the week so the whole idea of this system is that players injured in training will be calculated differently to those injured in matches.

Alongside this I am hoping to bring in reasons as to exactly what the injury is. This bit won't actually affect the game but it will be more interesting for managers to know why their player is injured.

I'm still working on this aspect so there's not too much more I can say at the moment but hopefully you will find it vastly better.
Posted by Mystify at 2/28/2010 08:14:00 pm

Email ThisBlogThis!Share to TwitterShare to FacebookShare to Pinterest
Labels: Training