Just thought I would give you another preview like I did in another post for the new scouting upgrade. This time it is the new team selection page. 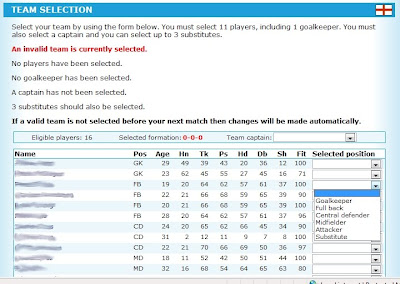 As you can probably see, there are major improvements to this particular page on the site. The first is that you can select players for other positions than their own. Even playing goalkeepers up front if you so wish. With the current positions, this probably sounds quite limited but when I bring further positions into the game it will give more scope to set your team up as you wish. Although extra positions probably won't be brought in until the new ratings are being used much more.

The 2nd thing you may notice is the ability so select 3 substitutes who will come on if your players get injured only in the first place. In the future I will give the ability to give instructions as to when certain changes should occur but to begin with it will just be injuries. I'm sure you'll agree that this is a step in the right direction.

Finally, you will have the captain selection only containing selected players and the formation will be updated as and when you make selections. I, personally, think it will be a far better way of selecting a team than the current one.

It won't be implemented for a little while but just thought you may want to see I am making progress.

Email ThisBlogThis!Share to TwitterShare to FacebookShare to Pinterest
Labels: Team

It has been suggested to me that a discipline table would be useful.

There were actually 2 suggestions regarding it.

One was to have a table similar to the leading scorers table which would show the worst offenders of a season. I don't really see the benefit of this. All players can have their current status viewed by looking at the individual players' page - a chart showing bad boys seems more a novelty than something of use. I'm open to your attempts at convincing me though as it's not too tricky to develop.

The second option was more realistic - an at-a-glance view of what players are currently suspended for a team. This could be displayed on the team information page underneath leading scorers and we could also have a divisional listing so you can see all suspensions in the division at the current time.

The benefit of the former is so that you can see if your next opponents have players out - the new scouting system doesn't show suspensions and in reality even fans know who is suspended for other teams so it's not something I want to hide. The divisional listing I'm less convinced about although I may well do it. The only reason for this in my view is so that towards the end of a season you can see if your promotion or relegation rivals are short of their players.
Posted by Mystify at 8/13/2009 09:46:00 pm 7 comments:

Email ThisBlogThis!Share to TwitterShare to FacebookShare to Pinterest
Labels: Discipline

I know these ideas are coming thick and fast at the moment but I'm just going through the ideas currently in my mailbox. I'm hoping most of these won't take me long to code and I'd rather get them all done before I move onto the next major changes.

This idea is down to receiving your mailbox mail via your email.

Firstly I intend it to be an optional feature so on your account you will check a box if you want this.

I was going to make it so that every mail into your mailbox will also be received by email but this may not be feasible as some of the messages will be coming from the end of week procedure.

Therefore I changed my plan so that it would be a daily mail to say how many new messages you had (if any) and a link to the site. Perhaps even stating who the mails are off.

Email ThisBlogThis!Share to TwitterShare to FacebookShare to Pinterest
Labels: Mail

At the end of last season one team gained what I would consider an unfair advantage by loaning 20 rated players for a very important game. I presume that these players were loaned from teams that had nothing to play for although I haven't checked. The opposition manager rightly complained but it was too late for me to do anything by then. I'm now hoping to have something in place to stop it occurring this season if I can.

Anyway, I need a way of stopping this so am looking for ideas. The only one I have so far is to disable loans for the final 4 or 5 weeks of a season when the important games are. I don't particularly want to disable transfers but just disabling loans may not be a bad idea.

In the future when I have implemented the new ratings and player salaries then it may be something that managers don't want to do anyway but it can always be reviewed once they are in place.
Posted by Mystify at 8/12/2009 10:45:00 pm 10 comments:

Somebody mailed me this week to state the team names in Belgium now contain teams that have expired or slipped into the lower reaches of the country's league system. I suspect this is probably the same for most of the countries. Previously changing team names was a big job due to the way I badly built the database originally. However after the recent changes it is a lot less of a job - once I've upgraded the sponsorship part of the site it will be the easiest yet too!

Therefore, whilst I am making changes to the game I don't see the harm in updating team names. I'll start with Belgium as this was what I was mailed about AND it's the first country in the game alphabetically so hopefully I can go through in order.

Below is my proposed list of changes for Belgium. I know there are a lot but I haven't done it for years! Let me know your thoughts of the below so I can finalise the list before I implement it. If you manage any of the teams below and want to discuss your team name change then feel free. There is scope for some to be changed. Especially if you prefer another team that is real and not too far down the Belgian league system.

One or two managers have expressed a concen that players placed on the transfer list are remaining on there too long. I do agree that something needs to be done here.

The first thing I am going to do is make players on the list forcibly get taken off upon a manager leaving a team. I don't think this happens at the moment so this is going to be my next task.

After that, I think I shall add a removal option to the player information page as an option to do so from that page can only help.

Finally, I get the impression that most managers think there should be a limit where players are removed after a certain amount of time. It's the timescale I am currently debating. Also, should the timescale be different between loanable and transferrable players? I think not but your thoughts would be good.

Whatever timescale is used, a message will have to go to the manager stating the player has been taken off so they can re-list him if they so wish.

As you may be aware, I have completed the development of a new scouting system which will replace the current one which I feel is flawed in many ways (along with sponsorship, training etc etc - there's loads!)

I can't launch this yet because it only uses the new player skills as opposed to the single player rating but here a couple of screen shots for you to view. 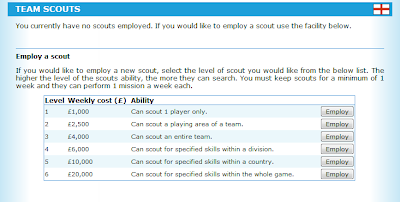 This screen shot is as it will begin for all managers. No scouts hired and the options for each scout. You can see they all have a weekly cost associated to them and they can all do 1 report a week at this cost. Up to level 4 they will bring back a maximum of 30 players but levels 5 & 6 are 40 and 50 players respectively.

This next screen shot shows the situation after hiring a level 4 scout and selecting that you want him to do a level 4 report. Each scout can generate reports for every level up to the one they are being paid for. therefore you could hire a level 6 scout and he could perform level 4 reports every week should you wish. 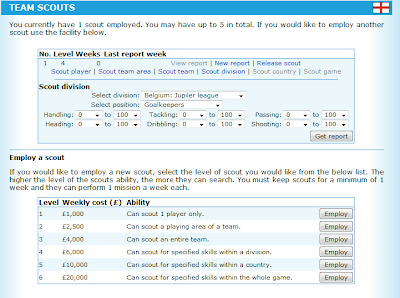 Upon requesting the report the scout will instantly provide the information you have requested. If there are more than 30 (or 40/50) players found then it will be a random selection of those players matching the criteria specified.

Once the report has been generated, the scout can not be released or generate a new report until the next week. This is because you need to pay for the report and payment happens weekly.
I could make it so that reports happen instantly and they are paid for at the time. However, I feel that there needs to be some challenge as to what managers select for scouting and I don't want to give the teams with loads of money too much of an advantage.

There can be up to 5 scouts a week all at levels of the managers' choosing. Even if a scout does not run a report for a week, they will still need paying as in theory they are on your staff to use as you wish.
Posted by Mystify at 8/11/2009 03:49:00 pm 5 comments:

This blog is going to be used to discuss all aspects of the development for Mystify Soccer. I get lots of ideas from managers that play the game and most of them do get considered.

I am hoping I can post the ideas on this blog and use it as my own reminder to develop them and also to get feedback until I come round to developing them.

As I run the game on my own, I obviously don't have time to develop the game at the speed I require but that doesn't mean discussions can't be had in the meantime - who knows, it may even motivate me to code at the moments I least feel like it.

The whole game is basically a tool for me to try development ideas out on. In lots of cases I implement certain things in Mystify before I use those ideas in business environments. However it is also a lot of fun and from reading various posts on the in-game noticeboard, I get the impression that players of the game would love more of an input.

I know I could perhaps develop a part of the site to actually run a discussion forum but I'd like to keep things separate then those that just want to play the game can do so without seeing the probable waffle that will end up appearing on here.

There will probably be quite a few posts in quick succession to start with as I note down all the ideas currently in my mailbox that players have suggested thus far. I will also post a couple of updates including screen shots of the aspects I have developed locally and haven't put live yet. Feel free to comment with your own thoughts and ideas.

Just bear in mind, I only have one pair of hands and limited free time :-)