You may have noticed that I have mentioned 3 game developments on the main site. 1 of which I have been vague about.

I know this blog doesn't get updated often but I don't get chance to develop that often either so the 2 go hand in hand. As such, I'm interested to know who follows this blog, however you may read it, and I would appreciate it if you don't post the below on the game message board.

However, feel free to let me know in the comments that you have read it (and you play the game).

Anyway, this is a sample screen shot (not finished) of the new game tactics; It's not finished yet because it doesn't actually do anything - I've only altered/added to the display. My next job is to make this page work and save to the database before I implement it into the game engine.

If you are wondering, then you will be able to add multiple of each - so you can attack for one half and then change to defensive after 45 minutes. On top of making the changes at specific times, there are a list of reasons for a change shown here; 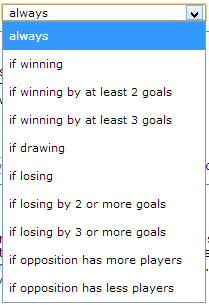 This means a change will only happen if the selected scenario matches.

As well as this, I will be adding an option to select 'Any' minute so that a change will happen based on just the scenario. Therefore if you have a man sent off you can go all defensive - or attack even more if you like! I haven't established exactly how the 'any minute' feature will work yet because 'if drawing' for example could happen multiple times and there may be conflicts so I will work on that as I implement it.

I know some of you may suggest that this should be done with substitutions as well and I intend to at some point. I'll try to walk with this first before running with timed subs.
Posted by Mystify at 4/29/2013 01:16:00 pm

Email ThisBlogThis!Share to TwitterShare to FacebookShare to Pinterest
Labels: Tactics